The Cold War and Portsmouth's Role

The Coming of an Age

After World War II, the United States and its allies and the Soviet Union and its satellite states began a struggle for supremacy known as the Cold War. It would last more than four decades, impacting continents and countries around the world. Here in the U.S., the Cold War’s legacy can be found still today in cities large and small and rural communities like Piketon, Ohio.

On August 1, 1946, with the stroke of President Harry S. Truman’s pen, the Atomic Energy Act was signed, and the newly formed U.S. Atomic Energy Commission (AEC) assumed its civilian duties of fostering peacetime nuclear science. Although production facilities and nuclear reactors would be owned by the government due to security reasons, the AEC was granted independent control over development and research activities in search of promising new peaceful utilizations of the atom.

In contrast to finding new peaceful uses of the atom, the Yalta Conference in 1945 initiated the Cold War era. The Cold War called for focus by the AEC on the support of national defense, and lessened the time and resources directed toward the goal of research and installation of non-military uses for the atom. For the security of the nation, weapons development and production took precedence and quickly created a growing need for enriched uranium.

The need for increased production would become even more apparent in the years that followed. In 1949, it was discovered that the Soviet Union had detonated a nuclear device, prompting the AEC to discuss the need for developing a thermonuclear weapon for national security. After much discussion within the government, President Truman settled the debate and made the imperative decision that work must begin on such a weapon. More motivation for augmenting production goals came when the United States sent forces to aid South Korea during the Korean War in response to Communist China's advancement into North Korea.

The urgency of the situation and the imminent possibility of exhausting the country’s enriched uranium production capacity at existing facilities dictated that expansion begin immediately. Because the key production sites across the country relied on one another for different functions of uranium processing, modifications and additions to a number of facilities became necessary.

Prior to construction of the Portsmouth Gaseous Diffusion Plant (PORTS), six key sites each played a vital role in supporting the government’s weapons production program. The Feed Material Production Center in Fernald, Ohio, (Fernald) was a uranium processing facility that fabricated high-purity uranium metal products (“feed materials”). In addition to its role of gaseous diffusion for separating uranium-235 from uranium-238 at the Oak Ridge, Tennessee K-25 site, the Oak Ridge, Tennessee Y-12 facility enriched lithium-6, a necessary component to increase the yield of thermonuclear weapons. The Paducah, Kentucky, facility (Paducah) would meet the increased demand for enriched uranium by sending its low enriched uranium on to PORTS for additional enrichment. The “Jumbo reactors,” K-East and K West, at the Hanford site near Richland, Washington, (Hanford) were the largest reactors built to produce plutonium at the time and greatly improved the government's ability to meet the supplementary demands for defense purposes. During this time, Hanford also erected the most advanced chemical separation facility to enhance plutonium production. The Savannah River Site, located near Aiken, South Carolina, contributed materials used in the nuclear weapons manufacturing process, primarily tritium and plutonium-239. The Los Alamos National Laboratory in New Mexico was established in 1943 as part of the Manhattan Project for a single purpose: to design and build an atomic bomb. Its Cold War mission involved research and design efforts associated with national defense. Locations of key nuclear facilities built during the WWII and Cold War eras are shown on Figure 1. (U.S. Department of Energy) 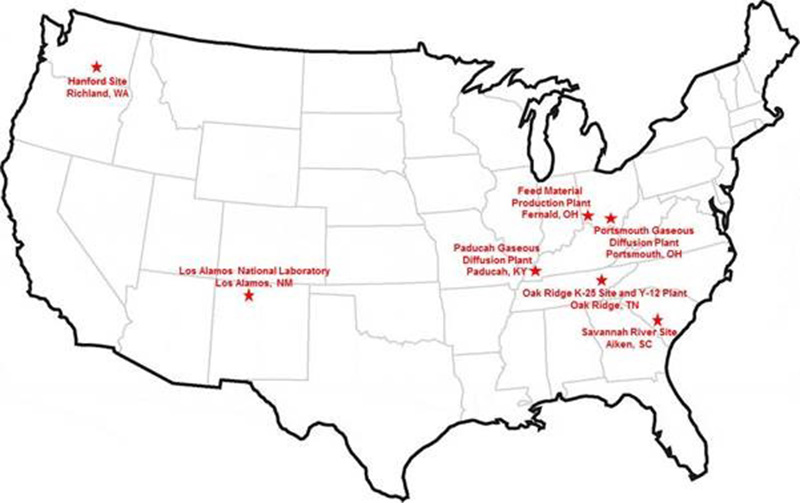 To complement the Oak Ridge K-25 site and Paducah enriched uranium production capabilities, a third site was needed to be able to produce enriched uranium-235 by the process of gaseous diffusion. In addition to the goal of having new gaseous diffusion capability to enhance production at the other two sites, the third site had to meet the “security through dispersion” requirement that called for the site to be located at least 150 miles away from both the Oak Ridge and Paducah plants. This would place the new site in a “strategically safe” zone.

The Paducah site, built in 1951, had been chosen partially because it was constructed on land already owned by the government. While this decision was certainly affected by time constraints imposed due to the Korean War, selection of the third site could be addressed with more time and consideration. The chronic labor strikes and lack of adequate housing at the Paducah location caused construction delays, and these problems were well noted by AEC personnel seeking the third site.

As early as June 1951, the AEC requested Oak Ridge staff to begin planning for a third uranium enrichment facility to augment production from the Oak Ridge and Paducah plants. A nationwide search for a location began in October 1951. In the initial phase of site evaluation, Stone & Webster Engineering, the site survey contractor, considered a limited set of criteria. The primary criteria for judging the merit of a location included: (1) readily available and cost-efficient means of producing significant amounts of electricity, (2) a nearby and adequate water supply, (3) access to a necessary labor force while meeting basic essential transportation requirements, and (4) location in a region where climate and weather would not impede operations and would provide a large area of mainly flat terrain.

By December 1951, the site survey had focused on seven areas: three in the Ohio River Valley, and one each in the Kansas City, Missouri area; Birmingham, Alabama area; Shreveport, Louisiana area; and one in Oklahoma. Of these, only the Ohio River areas had adequate power supply for the plant during early operation before the plant’s planned supporting power plants were operational.

In early 1952 the contractor began a second, more detailed evaluation of potential sites in the region focused on the three Ohio River Valley areas of Louisville, Kentucky; Cincinnati, Ohio and Portsmouth/Chillicothe, Ohio. Louisville and Cincinnati were strong candidates, but Portsmouth was considered a weak third choice due to a deficient highway system and remoteness from a major population center.

However, by March 1952, Louisville had been eliminated due to widespread protests from area business and civic groups who did not want an “Atomic Plant” in their community. Cincinnati emerged as the primary candidate location, but it was not optimum, so the AEC sought additional investigation. This more detailed investigation noted that the nearby Fernald site was having conflict with skilled trade unions regarding wages. Despite this concern, by April 1952 the AEC authorized further planning for a Cincinnati plant.

On July 7, 1952, the U.S. Congress passed the First Supplemental Appropriations Act, Fiscal Year 1953, which allotted $2.9 billion to fund the estimated construction costs to expand the nation’s facilities for producing fissionable materials. President Truman signed into law an estimated $1.2 billion to be used for construction of a new gaseous diffusion plant (GDP) and granted authority for its inception on July 15, 1952. Work to locate a site for the new enrichment plant actually began a year before the President signed the bill authorizing the construction, but no site had been selected at the time the law was enacted.

In early July 1952, the AEC selected Peter Kiewit Sons’ Company as construction contractor for the new plant and directed the company to negotiate with unions in Cincinnati, Louisville, and Portsmouth. By late July, Fernald had experienced work stoppages over pay issues and it was anticipated the same issues would affect the planned enrichment facility if it was located near Cincinnati.

By contrast, unions at Portsmouth were eager for the jobs and were willing to make commitments favorable to the AEC. Additionally, there was strong community support for the Portsmouth site, with numerous businesses, civic organizations, elected officials, and even churches sending letters of support for the “A-Plant”. Ultimately, these factors were instrumental in site selection. On August 12, 1952, the AEC announced selection of Portsmouth as the location for the new uranium enrichment plant, and construction of the plant began later that year. (U.S. Department of Energy)

End of the Cold War

By the 1980’s the Soviet Union’s economy was beginning to show signs of weakness and political unrest was taking place in many of the communist controlled countries of Eastern Europe. Nowhere was this more evident than in East Germany where in 1989 crowds of Germans gathered to begin dismantling the Berlin Wall – a barrier that for almost 30 years had symbolized the Cold War division of Europe. By the next year, East and West Germany were reunited as one, triggering the collapse of the other Eastern European communist regimes.

Then in 1991, Mikhail Gorbachev resigned as the Prime Minister of the Soviet Union and the Union of Soviet Socialist Republics subsequently dissolved. The result was the creation of numerous separate sovereign nations such as seven countries created from the former Yugoslavia, the reunification of Germany and the reestablishment of Russia and Ukraine as independent countries.

In a series of summits during the next year, U.S. President George H.W. Bush met with new Russian President Boris Yeltsin and pledged $4.5 billion (in 1992 dollars) to support economic reform for Russia. The former Cold War adversaries lifted restrictions on one another and an agreement was signed to reduce the former Soviet nuclear arsenal from 12,000 warheads to 3,000 by 2003. (U.S. Department of State) 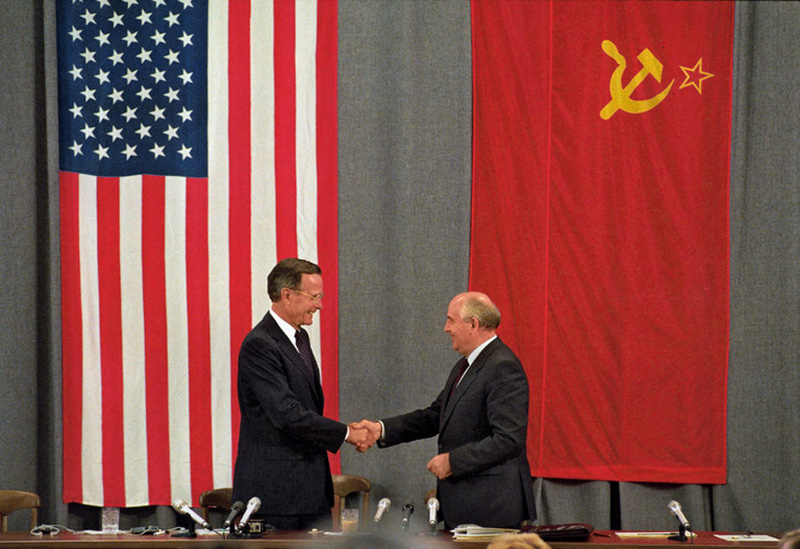 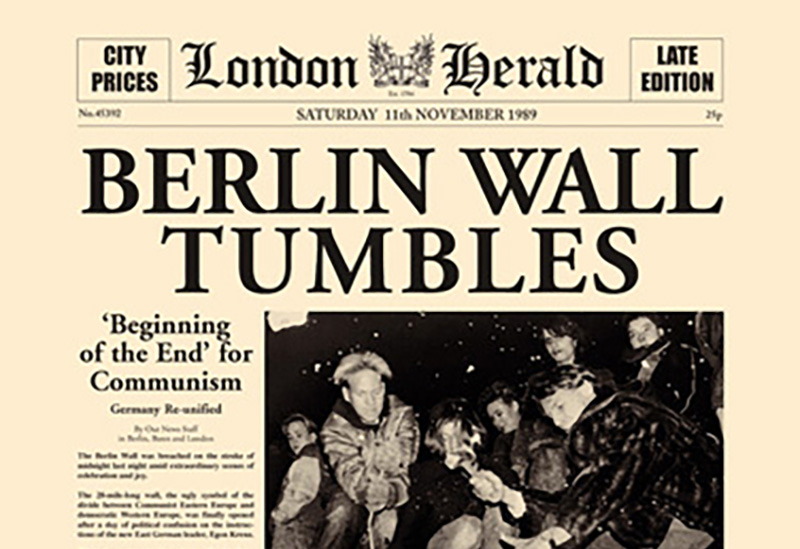 This is the front page of a newspaper article written only two days after the Berlin Wall was opened. As the heading states, the fall of the wall was the “beginning of the end of communism.” The fall of the wall unified the two sides of Berlin, which unified two different sides of people who had not seen each other in over 28 years. This article was used to portray that the opening of the wall was an extremely impactful because it gave citizens their freedom of movement again.

The Cold War. The John F. Kennedy Presidential Library and Museum. Retrieved on July 6, 2016 from http://www.jfklibrary.org/JFK/JFK-in-History/The-Cold-War.aspx

A Short History of the Department of State - The Berlin Wall Falls and USSR Dissolves. Office of the Historian, The U.S. Department of State. Retrieved on July 6, 2016 from https://history.state.gov/departmenthistory/short-history/berlinwall