In April 1952, the United States Atomic Energy Commission (AEC) announced a proposed new expansion of the nation’s atomic energy program in support of the Cold War. A major part of the expansion would be a new gaseous diffusion plant to increase the production of fissionable materials. On July 15, President Truman signed a bill appropriating funds for the expansion and the AEC outlined the scope of the program, which included additions to the gaseous diffusion facilities in Oak Ridge, TN and Paducah, KY as well as the construction of a new plant at a site in the Ohio River Valley not yet selected. The total cost of all the new additions to increase production of U-235 was approximately $2 billion.

On August 12, 1952 the commission announced the selection of a site in Pike County, Ohio for the new plant. The selection of the Pike County site was made only after extensive investigation of many possible locations scattered over much of the nation. Primary considerations in the choice included the ability to obtain immense amounts of both interim and permanent power, a large and dependable source of water, and adequate potential labor supplies.

A new name would be brought into atomic energy plant operations when Goodyear Atomic Corporation was selected as the operating contractor in September, 1952. On September 18, 1952 the President of Goodyear Tire & Rubber Company, E. J. Thomas and Board Chairman, P.W. Litchfield, made the announcement to a packed house at Goodyear Theatre in Akron, Ohio, the home of Goodyear Tire and Rubber.

The job of building the plant was awarded to Peter Kiewit Sons’ Co. of Omaha, NE which had two generations of construction experience. Since its founding in 1884 by Peter Kiewit, Sr., father of the then president of the firm, the company had grown to be one of the largest construction organizations in the United States.

Early construction planning took place in city buildings in Portsmouth. Buildings like the National Guard Armory and the Elks Club were packed with architects, engineers, and drafting tables. Even the old farmhouses on the site served temporarily as offices for architect engineers.

Eight architect engineer firms shared in the design of the plant. Approximately 12,000 architect-engineer drawings were used during construction - enough to cover about 2.5 acres. In addition, general engineering drawings totaled roughly 40,000 in addition to 16,000 shop drawings.

Advanced planning and scheduling were very important since the plant was designed to go into operation or “on stream” as soon as each unit was completed in a process building (NOTE: a unit was a group of cells which consisted of enrichment stages and process support equipment. The stage was the basic configuration of equipment consisting of a convertor, compressor, control valve and motor). This meant that sections of the building could be operational even though construction continued in other parts of the same building. See Process section. 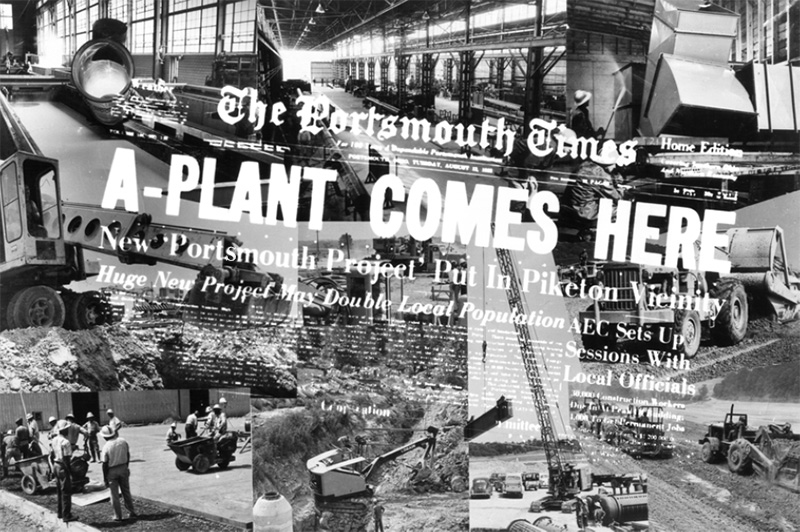