The area surrounding the PORTS facility is known to have a rich history of occupancy that extends back in time some 12,000 years. The prehistoric occupation of Pike County and of southern Ohio as a whole suggests a long and productive use of the land in this region. An extensive prehistoric context statement for PORTS and the region as a whole has been written by Burks (2011b). Burks’ Earthwork and Mound Sites study provides a detailed summary of all prehistoric archaeological sites in the immediate vicinity of PORTS by discussing the sites within the broad context of the Scioto River Valley and its environs. The reader is referred to this source for a detailed account of the prehistory of the region as the summary reported within the pages of this current document is intended as simply a brief overview that precedes a discussion of DOE efforts to identify and document prehistoric resources at PORTS.

The Scioto River Valley has long been recognized to contain some of the richest, and most spectacular, archaeological deposits within Ohio. These resources were first documented formally by Caleb Atwater (1820), who recorded several sites within the Scioto Valley including the Piketon Earthworks (33PK1) located on the southern banks of the Scioto River near present-day Piketon.

Archaeological investigations have identified a persistent Native American presence in the Scioto Valley through time. Based on over 150 years of research in the Midwest, archaeologists have divided this extensive block of time into a series of periods that are based on similarities in subsistence strategies and settlement patterns. Investigations have revealed some evidence of Native American occupation in the region for every major archaeological period (Paleoindian to Fort Ancient), a span of some 12,000 years.

The earliest clear evidence for Native American utilization of the Midwest is represented in the Paleoindian Period (about 10,000 to 8000 B.C.). This period was marked by the retreat of the last glaciers and was characterized by a warming climate and the development of hardwood forests. During this time, small groups lived on the landscape in a highly mobile fashion; it is estimated that the entire State of Ohio likely housed less than 700 people at this time (Seeman 1994). Although most of Ohio’s studied Paleoindian Period sites are located in the state’s northeast quadrant, the Sandy Springs site is situated on the Ohio River near the confluence of the Scioto River. Sandy Springs is a large site whose occupants crafted the time period’s distinctive lanceolate and fluted lanceolate shaped projectile points during repeated visits over a time span of approximately 1500 years (Cunningham 1973; Seeman et al. 1994).

The Early Archaic Period (8000 to 6500 B.C.) was marked by continued warming and a transition to hunting woodland animals such as deer, wild turkey, etc. Early Archaic groups still lived in smaller groups and were highly mobile, but population densities appear to rise dramatically by the end of the period (Purtill 2009). The succeeding Middle Archaic Period (6500 to 4000 B.C.) is poorly understood. Based on a review of existing material, and radiocarbon dates, scholars suggest that this period witnessed significant population reduction, perhaps by as much as 80 percent (Purtill 2009). The reason for this depopulation is unclear, but environmental evidence suggests that considerable variation in climatic conditions could have resulted in unpredictable resources from year-toyear, making the Ohio region unattractive for habitation during this time (e.g., Shane et al. 2001).

By around 4000 B.C., or the start of the Late Archaic Period (4000 to 700 B.C.), environmental conditions stabilized and the climate assumed modern conditions. Woodland game thrived and forests of nut-bearing trees such as hickories, black walnuts, and oaks rapidly expanded throughout central and southeastern Ohio (Shane et al. 2001). Archaeological investigations at the Madeira Brown site, situated on a terrace of the Scioto River just north of PORTS, provide extensive evidence of nut and squash utilization by Late Archaic groups (Church 1995). These conditions were very favorable for hunter/gatherer societies and archaeological evidence suggests substantial population increases first in the southern part of the state and somewhat later in the north (Purtill 2009). The Late Archaic witnessed intensification of subsistence strategies engaged in during earlier times, especially the collection of wild plant foods and the practice of incipient horticulture. In southern Ohio, some evidence of year-round occupation of sites is found, indicating increased sedentism and greater population across the state (e.g., Purtill 2009; Vickery 2008). Some of the most dramatic Native American building projects in the Midwest occurred in the Early Woodland Period (700 to 100 B.C.) and the succeeding Middle Woodland Period (100 B.C. to A.D. 500). These periods witnessed the height of the “Moundbuilders Culture,” which was characterized by the construction of earthen burial mounds and geometric earthworks. The density of mounds and earthworks in the Scioto Valley attracted the attention of early professional archaeologists. 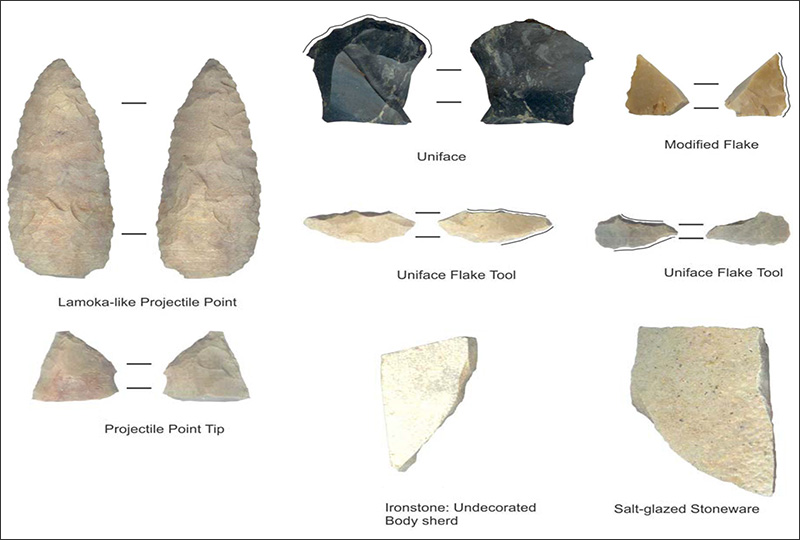 Selected artifacts and tools from the prehistoric survey

The Adena Culture of the Early Woodland Period is the best known Early Woodland complex in the area. The burial mounds associated with this cultural manifestation are typically small, and are usually located on either high terraces or bluffs or within the valley bottoms (e.g., Abrams 1992). Because of their distinct appearance on the landscape, Adena mounds have long been the subject of archaeological investigations. In Pike County, the largest mounds are Adena mounds and many of them are located near the PORTS facility. These well-documented, though mostly non-extant, resources include Graded Way Mounds, Van Meter Mound, Vulgamore Mound, and Barnes Mound, to name a few (Burks 2011b). Adena habitation sites, on the other hand, are usually small villages or hamlets located along low terraces and in the floodplains of stream valleys. Prufer (1967:315–316) noted little Early Woodland material during his Scioto Valley survey, which was especially interesting given the valley’s abundance of Adena burial mounds.

During the Middle Woodland Period, Native Americans continued to be involved in mound and earthwork construction. In Ohio, the Middle Woodland Period is often called Hopewell. This period was characterized by elaborate geometric earthworks, enclosures, and mounds that are often associated with multiple burials and a wide array of exotic ceremonial goods. Some of the more notable Middle Woodland complexes are located in the Scioto Valley, near Chillicothe, and they include Hopewell Mound Group, Mound City Group, High Bank Works, Seip, and Harness (Lepper 2005). Near PORTS, the Seal Township Works and the Piketon Graded Way are two of the most prominent earthwork complexes in Pike County (Burks 2011b). Materials used in the manufacture of these ceremonial items were acquired from various regions of North America, including the Atlantic and Florida Gulf coasts (shell, shark and alligator remains); North Carolina (mica); the southern Appalachians (chlorite); and Lake Superior (native copper); meteoric iron was also recovered from several sources. Ceramic assemblages are characterized by a range of domestic and ceremonial types, including plain, cordmarked, and decorated types, many of which appear to have been influenced from outside sources (to the south).

Over the past 30 years, archaeological research has shifted away from excavating the mounds and earthworks and towards understanding the daily life of the people that built these edifices. Current scholarship (Dancey and Pacheco 1997), argues for dispersed farmsteads that shared a central ceremonial center within each watershed. Prufer’s (1967:316) survey of the Scioto Valley “proved to be remarkably rich in Hopewellian surface remains.” Prufer notes that Hopewell materials tend to be located in close proximity to large earthwork sites such as Harness, High Banks, Hopeton, and East Bank, among others. During the Late Woodland Period (A.D. 500 to 1000), earthen mound building largely ceased, mortuary practices became less elaborate, and the long-range trade networks collapsed. Stone-lined mounds, however, still were built and often are found in upland settings overlooking larger settlements. Early in this period (circa A.D. 500 to 700), large, nucleated settlements are found in floodplain and terrace settings. These represent some of the first true ‘villages’ found in the Midwest. Native Americans continued to rely on hunting and collecting of wild food resources as well as small-scale cultivation of native seed crops, but agriculture began increasing in importance. Ditches or earthen embankments have been documented encircling several larger sites such as the Zencor and Water Plant Sites in Franklin County. These features, along with the concomitant rise in lethal projectile wounds, are thought to represent a rise in regional hostilities not witnessed in earlier times. By the later stages of the Late Woodland Period (A.D. 700 to 1000), large settlements are no longer established; local populations again concentrate in smaller, dispersed groups (Seeman 1992).

Within the Scioto Valley area proper, abundant Late Woodland materials were recorded during Prufer’s Scioto Valley survey (1967:316–317), from which he stated that “nearly every site investigated yielded materials attributable [to this period].” Just east of Piketon, investigations in the late 1970s identified a Late Woodland component located on a high bluff overlooking the Scioto Valley to the west (White 1978). Limited excavations suggested that the site represented a habitation camp of sorts. The rise of large permanent villages, increased population, and wholesale adoption of agriculture are seen as hallmarks of the Late Prehistoric Period (A.D. 1000 to 1650), or the Fort Ancient Culture (e.g., Drooker 1997; Griffin 1943). Current research suggests that Fort Ancient developed out of the local Late Woodland cultures, although varying degrees of Mississippian influence and inter-regional migration have been suggested. Fort Ancient is characterized by large permanent villages located along major drainages on terrace and blufftop locales. Villages vary in size but can be quite large. Beginning around A.D. 1400, Fort Ancient sites demonstrate dramatic village and societal life reorganizations. Archaeologists have termed this the Madisonville Horizon and it is characterized by increased regional interactions reflected in artifact styles, including ceramic and lithic tools (Drooker 1997; Henderson 1992). Increased interaction likely represents increased mobility of resident populations between neighboring sites and valleys. The nearest well-documented Fort Ancient village is the Feurt Village site, located south of Piketon and the PORTS facility, in Clay Township, Scioto County. An abundance of materials was recovered during the excavation of this site, including tools and jewelry made of animal bone, as well as local stream mussel shell. Jewelry included such items as beads, hairpins, and pendants, while tools included awls, punches, fishhooks, bone needles, garden hoes, and hide scrapers (Griffin 1943).

There also is evidence that some Fort Ancient sites were occupied into the Protohistoric Period (A.D. 1650 to 1800). The Madisonville Site, in Hamilton County, and the Morrison Village Site, in Ross County, have yielded European trade goods, suggesting occupation well into the seventeenth century (Drooker 1997). However, beginning in the mid-seventeenth century, aboriginal occupation of Ohio was disrupted when groups involved with the European fur trade in the Northeast began to expand the geographical range of their activity (including such events as the Beaver Wars) and European diseases decimated native populations. Many Shawnee villages are known from the Portsmouth area and around Chillicothe, but none have been recorded near the PORTS facility.