During the Cold War, this building housed equipment for the disassembly and decontamination of process equipment, for uranium recovery, and for plant laundry. The facility is centrally located to the X-326, X-330 and X-333 Process Buildings, as well as the X-700 Converter Shop and Chemical Cleaning Facility and the X-720 Maintenance and Stores Building.

The X-705 Decontamination Building provided space, special handling equipment, and fixtures to meet the requirements for disassembly, decontamination, and radiation monitoring of cascade process components removed for maintenance and repair in the X-700 Converter Shop and Chemical Cleaning Facility and the X-720 Maintenance and Stores Building. The recovery of uranium from decontamination solutions was also accomplished in the X-705 Decontamination Building. The recovered uranium oxide was processed to obtain UF6, which was reintroduced as feed in the cascade for enrichment in the uranium-235 isotope.

Equipment removed from the cascade after exposure to UF6 had to be disassembled for decontamination of component parts prior to the performance of maintenance or repair work. Decontaminated parts were routinely monitored to assure that all parts met approved plant allowable limits for surface and “wipe” radioactivity counts. Any part or component not meeting the plant allowable limits was retained for further decontamination or handled in the shops with approved protective clothing and respiratory protection.

The spray booth decontamination system was designed for processing large parts, such as compressor and converter parts. The building contains five booths in series. All decontaminated parts were normally sent to the maintenance shop in either the X-720 Maintenance and Stores Building or the X-700 Converter Shop and Chemical Cleaning Facility for rework. In some cases, the parts were sent to salvage or the aluminum smelter.

There were hand tables, which used a recirculating solution for decontamination of small parts contaminated with uranium. All solutions from this operation were placed in storage columns for eventual processing at the solution recovery facility.

The Small Parts Steam Pit was a final decontamination area for small parts after they have been processed at the hand tables. Parts were further cleaned in the pit area to remove any trace of uranium as detected by Health Physics personnel.

The Cylinder Decontamination Station was designed for the decontamination, including “heel” removal. A heel is a small mass of leftover UF6 and non-volatile uranium products. The uranium solution obtained from the decontamination process was stored for eventual processing or discarding at the solution recovery facility. After decontamination, the cylinders were completely cleaned and rinsed inside and out with water (steam) and dilute nitric acid to remove trace uranium, as detected by Health Physics personnel.

The laundry facility contained two 200- and one 400-lb-capacity water-extractors, eight 100-lb-capacity dryers, and two washers and two dryers of 25-lb capacity each. All protective clothing worn by employees was laundered daily. The clothing consisted of coveralls, socks, underclothing, towels, laboratory coats, and jackets. The cleaned clothing was distributed to the various locker rooms throughout the plant. The Goodyear Company Newsletter, Wingfoot Clan, in 1968 reported that on average some 200 tons of laundry were washed and 2,400 articles of wearing apparel repaired each year. To demonstrate the scale of the operation, approximately 90 gal of detergent, 30 gal of anti-acid, 30 gal of emulsifier, and 30 gal of softener were used each month in March 1985. 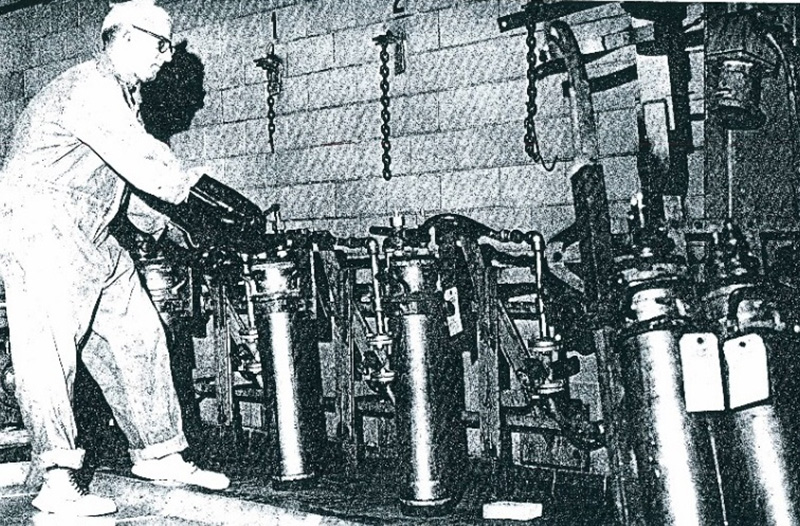